Why Not Have our Big Holiday on the Summer Solstice Instead of the Winter One?


Charles Dickens has a lot to answer for. With the publication of his Christmas Carol in 1843, he single-handedly made Christmas our biggest cultural holiday. Before the debut of his (self-published) little novella, celebration of the holiday had all but died out in Anglo-Saxon Christendom. The pen is mighty indeed.

A Christmas Carol revived the custom of taking the day off work, gathering for big family feasts and getting generous with gifts—remnants of an ancient pagan Solstice celebration which had been meshed with the Nativity story by some very clever Early Christian Marketers.

It was a great idea in Dickens day. People were stuck in their houses and villages and it gave everybody a chance to gather for some convivial cheer at the darkest time of year.

But I think Mr. Dickens and those early Christians would be appalled to see what the holiday has become. Every year it gets worse: travelers stranded at airports for days...buried in snowdrifts while trying to buy last minute gifts or that extra can of Ocean Spray… imprisoned in grounded airplanes with nothing to eat but rationed packets of Cheez-Its.

All in the middle of flu season.

OK, Aussies, Kiwis and other inhabitants of the Southern Hemisphere: you can ignore this rant or read on and chortle.

But seriously, , what’s up with setting our biggest travel-holiday at the time of year when we can count on the worst travel conditions?

It’s not really about Jesus, is it? There’s nothing in the Bible about Jesus making his fleshly debut in December. And we know for sure this event did not happen in a place with a lot of snow. Or holly, mistletoe, reindeer, or bearded white guys in furry outfits.

The bearded white guy who was first reputed to reward good children and admonish the bad ones at the winter solstice was a Norse deity called Odin (or Woden or Wotan—whatever you want to call the Wednesday god-guy.) And the rituals involving holly and mistletoe and pointy evergreen trees? Kind of more Druidish than Judeo-Christian.

So do we really need to go through all this suffering to honor a Teutonic war god who slithered down chimneys to put anthracite in the footwear of bad little Vikings?

Not that the Christmas/Druid holiday hasn’t had a good run. But now we’ve got wildly scattered families. And climate change. And sadistically dysfunctional air travel.

So I’m going to suggest a change of authors. Boot Charles Dickens in favor of William Shakespeare. Wouldn’t it make more sense to have our big yearly celebration at the SUMMER SOLSTICE—Midsummer’s Night?

OK, A Midsummer Night’s Dream isn’t as heartwarming as the Scrooge tale, but who needs warming in the middle of June?

Wouldn’t it be more fun to go home and visit Mom and Dad in the summertime? To barbeque that turkey on a backyard grill? Inspired by the Bard, you could decorate the front yard with inflatable Bottoms, Rude Mechanicals, and any number of sparkly fairies.

Maybe Puck could pop down our chimneys and leave gifts under the potted palm, which could be adorned with little surfboards and beach balls and those lights shaped like chili peppers.

We could still conduct the same kind of retail frenzy, since that seems to be necessary to the well-being of our economic system, but we could shop on safe, sunshiny streets, with evening light to choose them by.

Or maybe we need another story altogether. What about it, writers? Anybody up for writing some Summer Solstice tales and carols? About Rudolph the Red-Nosed Surfer, maybe? Or Frosty the Slushy Man? Hark the Herald Fairies Sing?

If Dickens could write a novel that created our biggest holiday, maybe one of you can write the book that will give us a new celebration that will fit better with our times.

An awful lot of cranky travelers and flu-sufferers would be very, very grateful.

NOTE: I'll be resuming my Poisoning People for Fun and Profit series in the New Year. But I thought we needed a holiday post that didn't involve killing people.

How do you feel about family get-togethers in the middle of winter? Would you welcome a change to a more travel-friendly time? 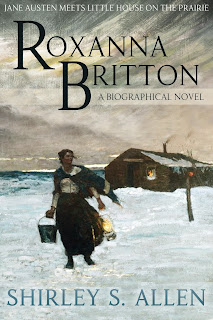 Only $2.99 for the ebook at all the Amazons, Kobo, Nook, iTunes, Inktera, and Scribd

This novel, by my mother, the late Dr. Shirley S. Allen, is a rip-roaring tale of how the West was won. It also happens to be all true. It's the story of my great, great grandmother, Roxanna Britton, who pioneered the Old West as a young widow with two small children.

It's got romance, action, cowboys (not always the good guys) Indians (some very helpful ones) the real Buffalo Bill Cody, and a whole lot more!

Widowed as a young mother in 1855, Roxanna breaks through traditional barriers by finding a husband of her own choice, developing her own small business, and in 1865, becoming one of the first married women to own property. We follow her through the hard times of the Civil War to the Great Chicago Fire of 1871 to a homestead in Nebraska to her final home in Elsinore, California.
Posted by Anne R. Allen at 11:05 AM