The Queen of Staves: Can Tarot Cards Solve a Mystery?

The new Camilla comedy-mystery, The Queen of Staves goes on a countdown sale! 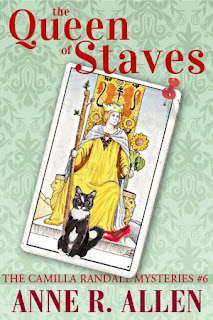 I've always been fascinated by the Tarot and bought my first deck of tarot cards sometime in the late 1990s. The history and the symbolism intrigued me, and I found that working on interpreting the cards gave me a lot of insight — not into the future — but into my own mind. Reading the tarot is a great way to sort through your own feelings about a subject and find a focus and a path of action.

I was working in a bookstore in Morro Bay when a distraught woman rushed in, demanding "a reading." At first I thought she was an author wanting a public reading/signing of her book. The store was too tiny for that sort of thing, which I tried to explain. But slowly I realized she wanted — in fact, felt she needed — a tarot card reading. There was a New Age bookstore around the corner and she had probably confused us, although she was too upset to believe me. She just kept pounding the desk and demanding her "reading."

The woman obviously had some mental health issues, but the intensity of that woman's need made the incident stick with me. I went to the New Age bookstore the next day and bought some cards and a handbook for learning to read them.

All these years later, now that I've given Camilla her own Morro Bay bookstore, I thought it would be fun to bring in the desperate tarot lady and explore what her needs might have been.

The result is The Queen of Staves.

I use the older word "Staves" instead of "Wands" as it appears in the Rider Waite Tarot, becauses a "Stave" (Staff) sounds so much sturdier than a "Wand," and the earthy woman who embodies the "Queen" of the title is nothing if not sturdy.

The cover, by the marvelously talented Keri Knutson of Alchemy Designs, is based on the 1910 Rider Waite Tarot deck, drawn by illustrator Pamela Colman Smith from the instructions of mystic A. E. Waite, and published by William Rider and Sons in London. But instead of a small black cat at the queen's feet, there's a rather large tuxedo cat — Camilla's cat Buckingham. I hope people will enjoy the sly humor of that.

I also hope people find it funny that the person who steps up to read the Tarot cards is none other than Camilla's secret boyfriend Ronzo, the tough-guy Iraq war veteran with the Tony Soprano New Jersey accent.

I guess I have a special fondness for Ronzo, which is why he's lasted longer than any of Camilla's other boyfriends. In this book he gets to tell his own story, with half the chapters told from his point of view. In a lot of ways it's his story.

Camilla doesn't really believe his Tarot readings are anything but a con, but his belief in the Tarot is sincere, and in the end, the cards come through for both of them.

Ronzo is seriously down on his luck at the opening of the Queen of Staves. In the last book, So Much for Buckingham, he'd given an unfavorable online review to a band called Leftenant Froggenhall, who set out to destroy his life.

Ronzo can only escape the band's gruesome persecution and threats to his loved ones by faking his own death and living as a homeless dumpster-diver.

In this book, he's forced to hide his blossoming relationship with Camilla to keep her safe from the band's vengeful clutches. Not easy when they're together every day, as Ronzo's unexpected tarot-reading skills keep Camilla's failing Morro Bay bookstore afloat.

When a mysterious Irish poet shows up dead on a tarot client's beach, it's up to secret lovers Camilla and Ronzo—and the tarot cards—to find the killer. Hopefully before the homicidal Froggenhalls arrive in Morro Bay...

Luckily Buckingham the cat is on the case, ready to fight the bad guys, tooth and claw.

And yes, your knowledge of poisons will help you solve the mystery, but I can't tell you any more. Spoilers!

What about you? Have you ever wondered about the symbolism of the tarot? Grab a copy while it's practically free!

Email ThisBlogThis!Share to TwitterShare to FacebookShare to Pinterest
Labels: Buckingham the cat, Ronzo, Tarot, The Camilla Randall Mysteries, The Queen of Staves