Bag Lady Fears: How I Faced Mine by Writing "No Place Like Home"


No Place Like Home is #4 in the Camilla Randall Mystery series, but it actually started out as a stand-alone novel, without Camilla's comic presence.

I started writing the story before my big success with the first three Camilla comedies. The Martha Stewart-like Doria Windsor was the protagonist. She materialized in my consciousness as a result of what some people call "Bag Lady Fear Syndrome."

According to MSN financial columnist Jay McDonald, "Bag lady syndrome is a fear many women share that their financial security could disappear in a heartbeat, leaving them homeless, penniless and destitute."

The Washington Times reported, "90 percent of women say they feel financially insecure…and almost half are troubled by a 'tremendous fear of becoming a bag lady'."

Bag-lady syndrome can be paralyzing, according to Olivia Mellan, a Washington, D.C. therapist who specializes in money psychology.

She says "Lily Tomlin, Gloria Steinem, Shirley MacLaine and Katie Couric all admit to having a bag lady in their anxiety closet."

"It cuts across women of all social groups; it's not like wealthy women don't have it," says Mellan. "Heiresses, women who have inherited wealth, have bag-lady nightmares because they really feel like the money came to them magically and can leave them just as magically."

When you quit your day job to write full time—especially if you're single—those fears can escalate to nightmares, anxiety attacks and debilitating self-doubt.

For me, they hit a crescendo when my first publisher went out of business and I had to go back to square one, writing query letters to agents and editors again like a newbie.

My magazine writing gigs had dried up, too: either the journals had gone under or were no longer paying. I'd been out of the workforce for years and the world was in the middle of a recession. My savings were dwindling fast. I feared I'd made all the wrong financial choices and I'd soon be living out of my car...or worse.

I started having a recurring nightmare about living in a rusted, wheel-less truck in some kind of dump full of rats. My skin was crawling with insects. Sometimes parts of my body would fall off. I'd wake up screaming.

One morning I woke from one of those horrific dreams to an interview on NPR's Morning Edition. (Yes, I have Public Radio on my clock radio: I guess that qualifies me as a super-nerd.)  They were talking to a successful Manhattan magazine editor who had lost her life savings to Bernie Madoff.

Look: it can happen to anybody, I told myself—even people with a ton of savings who have done everything right.

I got up and read my local morning paper, which was full of letters to the editor complaining about how homeless camps and panhandling were ruining our town's idyllic image as "the happiest town in America."

So I took a day off querying and jotted down an outline of a story about a magazine editor who lost everything and ended up in a homeless camp in San Luis Obispo. She was not only conned by a Bernie Madoff type, but married to him, so in addition to losing everything, she was accused of being complicit in his crimes. (Writers can be so mean.)

But it was cathartic. Picturing somebody like Martha Stewart living in a tent and cooking over a Sterno stove, worrying about where to go for showers and basic bodily functions—not knowing which homeless people she could trust—helped me to walk myself through my own "bag lady" fears.

Thinking the "unthinkable" sometimes helps us to cope with our anxieties. If we can visualize ourselves in a terrifying situation that has a positive outcome, it can help us overcome the terror.

As the Anxiety Doc says "When it comes to treating anxiety, panic attacks and phobias, creative visualization techniques have proven very therapeutic for sufferers. In order for the visualization to be completely effective, the person must involve all their senses in the process. They need to see themselves performing the behavior, hear the sounds associated with it and feel any tactile sensations. In some cases, even the senses of taste and smell will be involved."

And of course, that's exactly what a writer does. So when I visualized Doria Windsor in that homeless camp, I pictured her surviving each of my own fears: the lack of hygiene, the stink, the cold, hunger, loss of dignity, etc.

And if she could do it, so could I.

To give the homeless people in the camp personalities and backstories, I talked to the homeless people who panhandle in front of some of my favorite stores in Morro Bay. One woman was remarkably plucky and full of humor.  She became the model for my character of Lucky.

I decided not to make my homeless characters objects of pity, but strong-minded survivors who help solve the mystery of a homeless man's murder. In a way, they're the real heroes of my story. Hobo Joe is a musician who puts together a band of homeless musicians called the Boll Weevils. They play at the Red Barn in Los Osos.

Not long after I started the book, I got an offer from the editor of an independent press to publish my backlist. Then another offered to look at the new stuff.  Between September 2011 and December 2012, I published seven books. Two of the Camilla mysteries made the bestseller lists, and my editor wanted another Camilla book ASAP.

I was still working on the Doria story, but I realized that Camilla is usually on the brink of homelessness herself and she and Doria might even be friends I had left Camilla at the end of Sherwood Ltd working in a bookstore, not the most lucrative of businesses in the age of ebooks. 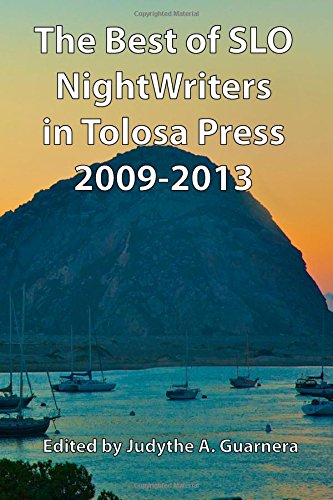 So I wove Camilla into the story and added a mysterious murder and of course, some romance for my always unlucky-in-love sleuth. I gave Doria a boyfriend too.

Turning the story into a romantic comedy-mystery lightened it up considerably and helped turn a lot of my fears into laughs.

Things are looking up. I think making my characters face the "unthinkable" helped me to think it through for myself. I hope it helps my readers, too.

What about you? Do you have fears of becoming homeless? Do you know any people who do? Do you think women are more likely to have the fear than men? Do you deal with your fears by writing about them?

I've written on this subject for More magazine and a shorter version of this piece appears in the SLO Nightwriters anthology.
Posted by Anne R. Allen at 9:52 AM