The Seventh Camilla Randall Mystery is out in ebook. The paperback will launch in January. It's a stand-alone, so you can start with this one even if you haven't read the others. 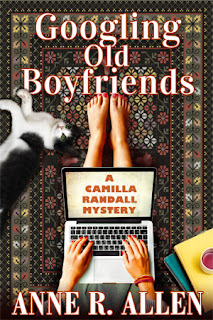 We all do it, don’t we? We start thinking about “the old days” and wonder “what ever happened to…?”

So we start Googling our former significant others.

Somehow it’s kind of embarrassing to let people know. Maybe because it feels a little stalkerish.  But it’s so fascinating to find out how people’s lives are turning out.


Then there are the tragic ones. The searches that bring up obituaries. And arrests.

One of my high school friends had died in Vietnam. Another had drowned in an ice fishing accident.

The saddest was the arrest report of one of my elementary school crushes…for possession of child pornography.

Light bulbs went off in my head. He had that awful “uncle” he always had to spend time with but hated. The older brother who used such filthy language he was regularly thrown off the school bus.

They had been strikingly beautiful boys, blond Italians. What horrors had my little friend been going through while I was carving his name in my wooden desk top, and chased after him at the skating rink when he’d stolen my hat? Who knows—the images he was arrested for may have been photos of himself.

When you get older, the obituaries come up more and more.

Last year, after I’d had my third search in a row come up with an obituary—the idea for a novel popped into my head:

What if a recent divorcee started Googling her old boyfriends and…every one of them turned up dead?

Then all I had to do was introduce the divorcee to Camilla Randall, my oh-so-polite sleuth who’s a magnet for murder, mayhem, and Mr. Wrong… and there was the story.

I didn’t bring in the tragic real-life stuff when I wrote this one. That wouldn’t work in a Camilla book. Maybe I’ll do a serious piece on the subject sometime in the future.

Here’s an excerpt from the opening chapter.

A laugh-out-loud mashup of crime fiction, romantic comedy, and satire. Morro Bay bookshop owner Camilla Randall is a magnet for murder, mayhem, and Mr. Wrong. But she always defeats the bad guys in her quirky, but oh-so-polite way.

In this stand-alone 7th book in the series, Camilla befriends socialite Mickie McCormack—a sexy, mysterious older woman who’s going through a painful divorce. Mickie has been Googling her old boyfriends to reconnect and “remember who she used to be.”

What about you? Have you Googled former lovers and significant others? Were any of the results tragic? Funny?

A comment will enter you into a contest to win a copy of the ebook for Kindle or other ereading device. I'll announce the winner in two weeks, on January 11th.

Ta-DA!! The winner of the contest is Chick Lit Shop, aka Mary Smith! Thanks for entering, everybody!