The Dinner Party Question and others: Debra Eve and Anne R. Allen in Conversation.


Back in 2012, I gave an interview to Debra Eve of the Later Bloomer. I thought it would be fun to revisit it.


Debra: After many years in theater, you published your first novel. What motivated you to become an author?

Anne: Writing was always my first love. My mom told me that when she tried to explain the "facts of life" when I was around seven, I said I didn't need to know that stuff because I was going to be a writer and live in a little cottage by the sea, so a husband and children would just get in the way.

When I hit forty, my father died suddenly and it was a wake-up call. I realized that if I was ever going to realize my dream, I'd better get a move-on. So I gave up my theater job and used my inheritance to buy that little cottage by the sea.

My first novel actually landed me an agent and an almost-deal with Bantam. But everything fell apart and I got discouraged and didn't write for about five years after that. But that writing bug wouldn't let go of me, so I went back to writing and knocking on agents' doors.

I filled a whole file drawer full of rejection letters between 1997 and 2002—before I got FOOD OF LOVE accepted by that first UK publisher. I finally burned all those rejections in a big bonfire last year. 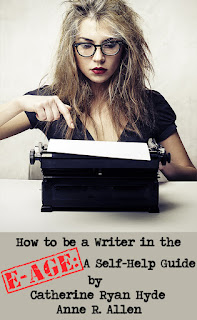 Debra: In How to Be a Writer in the E-Age, you advise, "DON'T put something in a novel "because that's the way it really happened." Could you expand on that, especially as it relates to your Camilla Randall mystery, Sherwood, Ltd.?

Anne: Great question. Sherwood was inspired by my adventures living and working in an erotica publishing house on the banks of the River Trent in Lincolnshire from 2002-2005.

A lot of things happened there that were far more preposterous than anything I could put in a novel. One of the people I met at the company was related to a famous murderer. Another had been a pretty well-known punk rocker. 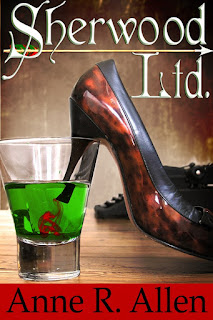 And there was a whole lot more drinking going on than I could put in the book (Drunks are pretty boring in fiction.) The setting is close to accurate, but none of the characters is actually based on a real person. Each one is a composite. With a lot of made-up stuff thrown in.

The truth is that life can be more outrageous than fiction. Fiction needs to have a logic to it that real life does not.

Debra: If you could invite any five literary personages from any time period to dinner, who would they be and why?

Can I have six? For some reason, I thought of six right off the bat.

1) Dorothy Parker—if just to sit back and listen to the bon mots.

2) Agatha Christie—I really want to find out what happened during those weeks she disappeared.

3) Oscar Wilde—Can't you just imagine a snark-off between him and Dorothy P?

4) Elliot Paul—He was a comic mystery writer who's almost forgotten now, but he wrote hilarious mysteries set in Paris in the twenties, when he was very much part of the literary scene. I'll bet he'd have amazing stories. He also wrote a memoir called The Last Time I Saw Paris. The title got ripped off by Hollywood and pasted on a Fitzgerald story that had the perfectly good title of Babylon Revisited.

5) George Eliot/Mary Ann Evans—She's a special hero of mine because I once met her ghost. Or at least it seemed like her ghost. The building where I lived in Lincolnshire was only a block from the house where she lived when she wrote The Mill on the Floss, and sometimes I could feel her presence there. She was such an amazing pioneer in so many ways. She brought empathy and a modern sense of compassion to the Victorian novel.


6) Noel Coward—As long as we have these wildly entertaining wits at the party, it wouldn't be complete without the master. The only thing that might lure me back into the theater would be a chance to play Madame Arcati in Blithe Spirit. I quit the theater just when I was getting to be the right age to play her.


Debra: What advice can you give late-blooming writers who have families and day jobs?
Anne: Network with other writers. Don't try to go it alone. Family and friends may be completely non-supportive even though they love you. They may feel you're trying to be "better than" them. And they may begrudge your writing time if you used to spend that time together.

Non-writing friends may refuse to read your stuff or they might give nasty, clueless critiques—so it's best to line up other writers to be your beta readers in order to hang onto your friendships. Let friends and family read your work when the book comes out (and be aware they may not even read it then.) I learned that lesson the hard way.

Most important: remember publishing is a business—a business that takes a long time to learn. When you aren't producing a saleable product, people will reject that product, but it's not a rejection of YOU. Educate yourself and keep learning and growing. Eventually, you'll sound and act like a professional and you'll be accepted as a professional—because that's what you are.

***
What famous people would you like to invite to a dinner party?

Sherwood Ltd. takes aim at the world of small press publishing and all things British. It's a madcap tale of intrigue, romance and murder set near the real Sherwood Forest in the English Midlands.

After discovering a dead body near the dumpster where she's been diving for recyclables, down-on-her luck socialite Camilla Randall escapes to England, enticed by the charming Peter Sherwood—a self-styled Robin Hood who offers to publish a book of her etiquette columns at his unorthodox publishing company. Suddenly-homeless American manners expert Camilla Randall becomes a 21st century Maid Marian—living rough near the real Sherwood Forest with a band of outlaw English erotica publishers—led by a charming, self-styled Robin Hood who unfortunately may intend to kill her.

$2.99 at All the Amazon Stores and Barnes and Noble

Sherwood, Ltd. is also available in paper from Amazon and Barnes and Noble
Posted by Anne R. Allen at 11:35 AM