This week one of my readers suggested that I put more autobiographical material in my novels. She especially wanted to know more about the time I was stalked and terrorized by a gang of Amazon review trolls and Goodreads bullies. 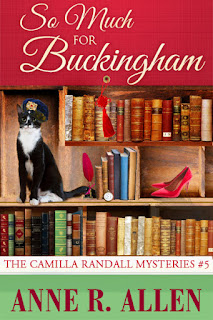 The truth is, some scenes from So Much For Buckingham take a whole lot of material from my real experiences back in 2012.

So I decided to post a scene here today.

I think writing this scene helped me process my own trauma and put it in perspective. By adding the cat for comic relief, it also helped me lighten my attitude to my own experience.

When I was under attack, I hadn't committed the cardinal sin Camilla has—responding to an online review. But I had witnessed the bullying of a teenager who had responded negatively to an online review and that meant I got on the full Goodreads bully treatment. (Goodreads later banned the ringleaders of that notorious gang.)

The obscene threats are taken verbatim from threats I saw or received via email, blog comment, and “review.” The bullies did indeed send me a photo of my house along with death threats, to escalate my fear.

I only figured out later the photo they emailed me was simply taken from Google Maps. At the time I feared these people were right here on my property, photographing me. The Google image had been taken only months earlier and the photographer happened to get my garbage bins in the shot. The night I got the death threat, it was garbage night and the bins were at the curb just as they were in the photo.

The panic Camilla feels is what I felt. I knew I couldn’t get any help from law enforcement, since I had no proof these lunatics planned to carry out the threats—and it turned out they didn't. But I had no way of knowing that. So I was as terrified as if these murderer-wannabes were really outside my door.

I think online bullying has only got worse since then. But I don’t think it’s as prevalent in the online writing community as it was in the wild days of the "Kindle Goldrush."

Like Camilla, I have worked in bookstores, although I've never owned one, as Camilla does. She’s an author, like me, but she writes etiquette books, something I would fail at miserably.

I did once have a tuxedo cat who banged my screen door the way Buckingham does in this scene, but alas, I didn’t have him to save me from the psycho review bullies during my night of terror.

In the following scene, Camilla is alone in her cottage, unable to contact her best friend Plantagenet, who has flown to England (Where he meets the ghost of Richard III, but that's another subplot.)

Plus her publishers haven't returned her calls for weeks. So she feels alone in the world when she gets the death threat. She has been getting nasty "reviews" and comments from the self-styled "review police" after committing the gaffe of responding to a review, but this is the first time her life is threatened.

Later one of the trolls, "DickonthePig" is found murdered during a historical reenactment in the English Midlands, and Plantagenet is a suspect. But here Camilla doesn't know if these people are truly homicidal, or just obscenity-obsessed online crazies.

***
Have you ever been the victim of online trolls? Did they send death threats? Did you call the police? Have you ever processed a trauma by fictionalizing it?


So Much for Buckingham IS ON SALE AT ALL THE AMAZON STORES
Until September 30th
"Delicious wit, wonderful eccentric characters, and a beguiling plot. Camilla Randall is a delight!"...Melodie Campbell, Canada's "Queen of Comedy"

"This wonderfully satiric comedy is a joy to read. On the surface, it's a frothy romance cum suspense story about a whacky writer, Camilla, whose life is threatened by trolls and who topples from one hilarious disaster into the next. But underneath, it provides a perceptive insight into the mad world of modern publishing, the sub-culture of Internet lunatics and the mindset of cultists who can - and do - believe ten impossible things before breakfast. The reader is left with the question: how much of the story, perish the thought, might be true? Tremendous fun, wittily satiric and highly recommended."...Nigel J. Robinson

Available in ebook from:
All Amazons Kobo  Nook Smashwords  Googleplay Scribd
Available in paper from:
AmazonUS AmazonUK  Barnes & Noble
Audiobook from Audible  and iTunes
Posted by Anne R. Allen at 11:18 AM