Poisoning People for Fun and Profit—Part 10: Castor Beans and Ricin

Castor oil was the subject of horror stories my mother told me about her youth. Apparently it tastes awful and whenever a kid was sick in the early 20th century, they were given castor oil as an all-purpose medicine. Its laxative properties were supposed to cure all ills. 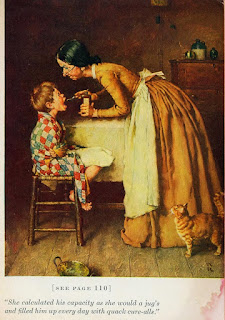 Castor oil has been used as a medicine for millennia. It was also used for lighting, and is still used today for multiple purposes, including cosmetics, insecticides and fungicides. In Brazil, it's being developed as a biofuel.

Luckily as a small child, my mother didn't know that the castor plant that provides that all-purpose oil also produces one of the most lethal poisons known to man, or she might have spit it out even more often. .

The castor bean (not actually a legume but a seed) not only contains castor oil but it also produces the lethal toxin, ricin (ricinus communis.) Only a handful of the beans can render enough ricin to kill.

When ingested it is highly poisonous, but it's even more toxic when inhaled or injected. The poison acts by inhibiting protein synthesis in ribosomes, causing widespread cell death.

The name comes from the Latin word for tick, ricinus, because he seeds resemble a kind of tick.

A dose of purified ricin powder the size of a few grains of table salt can kill an adult human. The median lethal dose of ricin from injection or inhaling is about 1.78 milligram for an average adult.

It only takes four to six raw "castor beans" to kill a human, although accidental poisonings are rare.

Symptoms usually begin within two hours, but in some people they can be delayed up to a day or more. These include a burning sensation in mouth and throat, abdominal pain and well, what laxatives do. Within several days there is severe dehydration, a drop in blood pressure and a decrease in urine. Unless they are treated, victims die in about four days. But in most cases there can be a full recovery.

It doesn't work fast, but it is hard to detect, which makes it a favorite with murderers and terrorists.

The plant (sometimes called "African Wonder Tree") is quite pretty and is often used for ornamental use. But simply being around the plant can be dangerous for some people, since it's one of the most powerful allergens around. It's a strong trigger for asthma because it produces abundant amounts of very light pollen, which easily become airborne and can be inhaled into the lungs, triggering allergic reactions.

The sap of the plant causes skin rashes. Individuals who are allergic to the plant can also develop rashes from merely touching the leaves, flowers, or seeds.

But it's an important cash crop in many parts of the world, especially India. And because the plants are hardy, they are used in decorative plantings in parks all over the world.

Griffith Park in Los Angeles has abundant castor plants, and they have naturalized and now grow wild all over California.

Californians with murder on their minds have an abundance of poisonous plants to choose from, with the oleander planted all over our highway median strips and hemlock growing wild in drying creek beds.

The biggest danger from the beans is to cats and dogs, so if you suspect your pet has been around the plant and displays symptoms, get to the vet asap. More on what to do from the Pet Poison Hotline.

Ricin, when isolated, is considered a weapon of mass destruction. And it's often used for political murders.

In 1978, the Bulgarian dissident Georgi Markov was killed by a KGB agent using a weapon built into an umbrella. He jabbed him in the leg with the weapon in public on the Waterloo bridge. The weapon embedded a small pellet containing ricin into Markov's leg and he died four days later.

It seems to be a special favorite with the anti-government terrorists who like to send toxins to government officials through the Postal System.

Homegrown terrorists in the US and Britain seem to have a fascination with it. In 2009, a UK father and son, Ian and Nicky Davison, were arrested for possessing ricin as a part of a far-right terrorism plot. In April 2013, a letter addressed to President Obama tested positive for ricin, and in a bizarre incident that same year, actress Shannon Richardson pleaded guilty to sending ricin laced letters to President Obama and Mayor Michael Bloomberg. She confessed, but claimed her husband made her do it.


It sometimes figures in domestic murders as well. In January 2006, a man named Chetanand Sewraz in Richmond, Virginia was arrested for possessing mashed castor beans, which he allegedly intended to use to kill his estranged wife.

In 2014, a teenager sent a scratch-and-sniff birthday card laced with ricin to a man dating his ex-girlfriend. He bragged about the toxic card to a coworker at Target, who notified authorities.


And fans of Breaking Bad know that Walter White liked to use it to eliminate his competition in the drug trade. A cigarette provides a handy delivery device.

What about you? Do you have any ricin stories? Can you think of any books that use ricin as a murder weapon?


Here are links to the other posts in this series.


GHOSTWRITERS IN THE SKY: CAMILLA MYSTERY #1

When a ghostwriter's plot to blackmail celebrities with faked evidence leads to murder, Camilla must team up with Marva to stop the killer from striking again.


Ghostwriters in the Sky is only 99c in e-book at all the Amazons iTunes, GooglePlay  Kobo, Inktera, Scribd and NOOK.

It is available in paper at Amazon and Barnes and Noble.

It is FREE at iTunes, Inktera, and Kobo

"Ghost Writers is set in a writers' conference in Santa Ynez Valley, where I've lived for twenty years.... This book is hysterically funny AND accurately depicts the Valley. Anne Allen gets it right, down to the dollar bills stuck on the ceiling of the Maverick Saloon. It was so fun to read as she called out one Valley landmark after another. Allen got the local denizens right, too, the crazy characters that roam our streets"...Sandy Nathan, award-winning author of The Bloodsong Series