White Snakeroot (Ageratina altissima) is a poisonous plant I'd never heard of before starting this series. Not a lot of deaths from white snakeroot have been reported in the last 100 years or so, but it was a major killer in the American Midwest in the early days of European settlement.


That's because the poison contained in its leaves and flowers (tremetol) can be passed on to humans in the milk and meat of animals who have ingested it. The indigenous Shawnee people knew of its dangers, but the settlers did not.

The plant is native to the Americas and grows all over the Midwestern United States. It grows in woods and brush thickets where it blooms from midsummer into the autumn.

It looks like a harmless wildflower, and the root is used to treat snakebite. (Hence the name.)


But it is a deadly poison when ingested. It causes tremors, vomiting, thirst, delirium and death. It is toxic to most mammals, especially horses and cattle. Goats are affected too, although their digestive systems fight the toxin more easily so their milk is not affected.

Animals poisoned with White Snakeroot will tremble, show an odd placement of hind feet close together, and have difficulty breathing. But they may not die immediately, so they continue to produce milk.

The fact that the toxin tremetol can pass through cattle into their milk was the cause of many deaths of early settlers in the American Midwest. They called the cause of death "milk sickness" and didn't discover the cause for many decades.

Abraham Lincoln's mother, Nancy Hanks Lincoln, died of milk sickness at the age of 34, when Abe was only 9.

Dr. Anna Pierce Hobbs Bixby, the original "Medicine Woman," revealed the cause of milk sickness in 1830, having learned it from a Shawnee woman, but her findings were not accepted by the medical establishment until 1928.

BTW, Anna's second husband, Eson Bixby was a notorious outlaw who led a double life. According to local Illinois legend, when Anna discovered who he was, she hid her life savings, which apparently were substantial, in a local cave, for fear he'd try to kill her for her money. And he did just that, but she escaped, only to die a short time later. The treasure is supposedly buried in Rock Creek, Hardin County, Illinois and has never been found. Anna's ghost is said to haunt the area.

There's a great novel in that story!

There has to be a good story in white snakeroot, too. Maybe a vegan wife on a Midwestern farm kills off her husband by feeding his favorite milk cow some of the toxic herb. Nobody would suspect, since this kind of poisoning is so rare these days.

What about you, readers? Have you ever heard of White Snakeroot poisoning, or "Milk Sickness." How about Dr. Anna Bixby? Isn't that a story that needs to be told?

Reading about pioneer doctor Anne Bixby reminded me of my own pioneering great, great grandmother, Roxanna Britton. My mom wrote Roxanna's story into a gripping novel that brings that period of American history to life.

The true tale of a powerful woman who pioneered the American West: Anne's great-great grandmother,  Roxanna Britton, born in Western Reserve, Ohio in 1833. This gripping novel based on Roxanna's extraordinary life was written by Anne's mother, novelist and scholar, Shirley S. Allen. 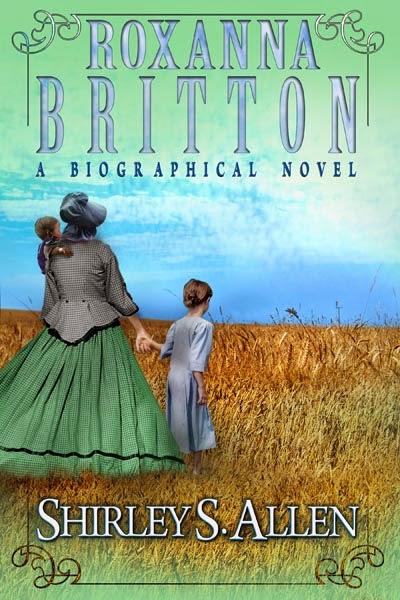 Widowed as a young mother, Roxanna breaks through traditional barriers by finding a husband of her own choice, developing her own small business, and in 1865, becoming one of the first married women to own property. We follow her through the hard times of the Civil War to the Great Chicago Fire of 1871 to a homestead in Nebraska to her final home in Elsinore, California.

"This has become one of my all time favorite stories of "real" people. Ms. Allen's adept use of dialogue and her clear eye for drama and suspense kept me compulsively turning the pages. Her evocation of a bygone era, rich with descriptive details--the historical Chicago fire is one vivid example--is absolutely brilliant. I will never forget Sanny and her family, especially her struggle and her daughters' struggle to become individuals in a male dominated world.

"But it is family that triumphs in the end; and the need for it to survive resonates most deeply in my mind and heart. An excellent novel that I highly recommend to anyone who enjoys reading true stories about people who not only overcome adversity with grace and integrity but through strength of character also prevail. Well done, Ms. Shirley Allen!"...author Ann Carbine Best

Roxanna Britton is only $2.99 as an ebook at all the Amazons, Kobo, iTunes, Inktera, and Scribd.
Posted by Anne R. Allen at 9:59 AM