Datura (Datura Stramonium) a.k.a. Jimson Weed or "Moonflower" is another beautiful but deadly plant in the nightshade family. As a murder weapon it's not terribly popular at the moment, but according to Agatha Christie it was once a classic way to do away with unwanted husbands in India and Southeast Asia.


The flowers are large and trumpet shaped and come in lovely colors, from pure white to lavender, pink, red, yellow and peach.

Like most poisons, it has medicinal as well as toxic properties. In Ayurvedic and Chinese traditional medicine it is used as a treatment for asthma and inflammation and is used as a painkiller.

Datura also has recreational and spiritual uses (seriously not recommended for the uninitiated.) It has unusual effects on brain chemistry, including highly realistic, often terrifying hallucinations, bizarre, sometimes violent behavior, amnesia, and hyperthermia (which often leads to throwing off of clothing.) Overdoses are common. Death comes from cardiac arrest.

A tell-tale sign of Datura intoxication is highly dilated pupils and the inability to tolerate sunlight. 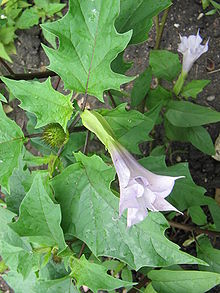 (Maybe your character isn't really a vampire. He's just been experimenting with Datura.) Because of the pupil thing, if an experiment with Datura doesn't kill you, it can result in blindness—usually temporary.

Datura blossoms are night-blooming, hence the "moonflower" name. The flowers, seeds and roots are the most dangerous. They contain the toxic tropane alkaloids atropine, scopolamine and hyoscyamine, which are categorized as "deliriants."

A deliriant differs from a hallucinogen because it blocks certain neurotransmitters in the brain and creates an all-encompassing delirium. It's impossible for the victim to tell reality from fantasy. 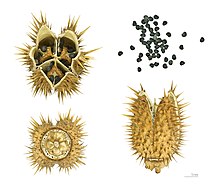 But it may best be known by a corruption of "Jamestown weed": "Jimson weed." 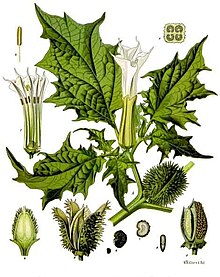 The plant is found all over the world, and will grow pretty much everywhere there is dirt and warm weather, but is native to North America and South Asia. It was used as a mystical sacrament by indigenous North American people, and Hindus believe Lord Shiva enjoys smoking it. It is still part of sacred rituals in Nepal and parts of India.

In Haiti, Datura is sometimes called the "Zombie Cucumber" and in his book, The Serpent and the Rainbow, Canadian ethnobotanist Wade Davis identified Datura as a central ingredient of the concoction voodoo priests use to create zombies.

Datura grows all over my own neighborhood on the central coast of California. The native Chumash tribes here used it in their sacred rituals and believed it allowed them to communicate with the gods. The goddess of Datura was called Momoy, who was pictured as a wild-looking old woman. She brought young tribal members visions of their spirit animals and could foretell the future.

One of the plant's names, "Jamestown weed", comes from the town in Virginia, where British soldiers were drugged with it while attempting to suppress Bacon's Rebellion. They spent eleven days appearing to have gone insane, as this contemporary account describes:

"The James-Town Weed (which resembles the Thorny Apple of Peru and I take to be the plant so call'd) is supposed to be one of the greatest coolers in the world. This being an early plant,
was gather'd very young for a boil'd salad, by some of the soldiers sent thither to quell the rebellion of Bacon (1676); and some of them ate plentifully of it, the effect of which was a very pleasant comedy, for they turned natural fools upon it for several days: one would blow up a feather in the air; another would dart straws at it with much fury; and another, stark naked, was sitting up in a corner like a monkey, grinning and making mows [grimaces] at them; a fourth would fondly kiss and paw his companions, and sneer in their faces with a countenance more antic than any in a Dutch droll." (Yes, that's spelled right. A Dutch droll was rather like our little toy "trolls" of the 1970s—grotesque funny toys will silly smiles.)

"In this frantic condition they were confined, lest they should, in their folly, destroy themselves – though it was observed that all their actions were full of innocence and good nature. Indeed, they were not very cleanly; for they would have wallowed in their own excrements, if they had not been prevented. A thousand such simple tricks they played, and after eleven days returned themselves again, not remembering anything that had passed." --The History and Present State of Virginia, 1705


The unfortunate soldiers seem to have eaten the leaves of the plant. If they'd eaten the seeds, they probably would not have recovered. The seeds, which come from small burr-like seed pods, contain about .1 mg. of atropine each. 10 m or less of atropine is lethal to humans.


Sometimes Datura is ingested by accident. In India people sometimes are afflicted by eating honey during the Datura blooming season.

In some parts of Europe and India, Datura is still a popular poison for suicide and murder. In 1996, 120 people in India were poisoned by a cafeteria meal that contained rice tainted with Datura. It was never ruled whether the incident was an accident or murder.


In 2008, a family in the U.S. poisoned themselves when they ate cooked Datura root and leaves in an "all natural" stew made from ingredients found in their backyard. (Makes Micky-D's take-out look like a better choice than we realized, doesn't it?)

I don't know of many uses of Datura in fiction. As I said above, Miss Marple mentions it in A Caribbean Mystery, but it doesn't play an important part. Here's the quote:

"'They believe what they are told,' said Miss Marple. 'Yes indeed, we're all inclined to do that,' she added. Then she said sharply 'Who told you these stories about India, about the doping of husbands with datura . . . .?'"

The scent of the Datura blossom is favored by perfume makers as an exotic note in dramatic perfumes. Over 50 commercial perfumes contain Datura, including "Datura Noir", a "kaleidoscopic" scent from master perfumer Serge Lutens.

Many thanks to Janet Boyer for the suggestion of Moonflower for this series!

What about you? Have you heard any Datura stories? Do you know anybody who has taken it recreationally and lived to tell the tale? Can you think of any mysteries that use Datura as a plot device?

THE LADY OF THE LAKEWOOD DINER

99c at Amazon for a limited time!

A comedy that pokes fun at the myth of a Golden Age, making parallels between the Grail legend and the self-mythologizing of the Baby Boomer Generation.

Someone has shot aging bad-girl rocker Morgan Le Fay and threatens to finish the job. Is it fans of her legendary dead rock-god husband, Merlin? Or is the secret buried in her childhood hometown of Avalon, Maine?

Morgan's childhood best friend Dodie, the no-nonsense owner of a dilapidated diner, may be the only one who knows the dark secret that can save Morgan's life. And both women may find that love really is better the second time around. 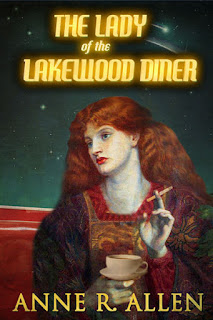 "A page turning, easily readable, arrestingly honest novel which will keep you laughing at yourself. Who doesn't remember crashing on a mattress at a friend's apartment with the stereo blasting Iron Butterfly and no idea where you'll stay the next night? A cultural masterpiece for the discerning reader."...Kathleen Keena, author of Adolescent Depression, Outside/In

Available in ebook from:
All Amazons iTunes  Kobo Barnes & Noble
Posted by Anne R. Allen at 10:28 AM