Strychnine is one of those poisons that finds its way into a lot of mystery novels. It has been the weapon of choice in classic murder mysteries from Agatha Christie's The Mysterious Affair at Styles to the movie Psycho.

Maybe it's popular in fiction because it works very fast. And it's equally lethal when eaten (although it has a very bitter taste), injected, or inhaled. The symptoms of strychnine poisoning are unmistakable. They include convulsions, a strange arching of the back, and a clenching of the jaw muscles that leave the corpse with a ghoulish grin.

Arthur Conan Doyle described the signs of strychnine poisoning in his Sherlock Holmes mystery The Sign of the Four:

"By the table, in a wooden arm-chair, the master of the house was seated all in a heap, with his head sunk upon his left shoulder, and that ghastly, inscrutable smile upon his face. He was stiff and cold, and had clearly been dead many hours. It seemed to me that not only his features but all his limbs were twisted and turned in the most fantastic fashion."

The poison comes from the Strychnine tree (Strychnos nux-vomica), known as "the suicide tree" in its native habitat in India and the tropics of Southeast Asia. The tree has a crooked, short, thick trunk and the fruit has an orange color and is about the size of a large apple with a hard rind. It contains five seeds, which look like flattened disks.

These seeds are the most dangerous part of the tree. They contain alkaloids that can disrupt the heart’s rhythm within hours of consumption. They also cause convulsions and stimulation of nerves in the spine, making it a very nasty way to go. The onset of respiratory failure and brain death can occur in 15 to 30 minutes.

Strychnine seeds were first imported to and marketed in Europe as a poison to kill rodents and small predators as far back as 1640.

Strychnine was also discovered in the Philippines a century or so later in a shrub called St. Ignatius Bean (Strychnos Ignatii.) The fruit of this shrub contains 25 seeds that have even more of the toxic poison than Strychnos Nux Vomica. The fruits themselves are not toxic and are a favorite snack of monkeys, which is why they are sometimes called "monkey apples."


In Malaysia and Java, people extracted the seeds of the Ignatius fruits and utilized them as dart poison for their blowguns.

Like most poisons, strychnine has also been used for medicinal purposes. In the Philippines it was believed to be a cure for cholera, and it is still used in homeopathic doses in some places today.

In the 19th century, people used it as a recreational drug and thought it had performance-enhancing abilities. H. G. Wells discussed its use in his novella The Invisible Man. The title character says: "Strychnine is a grand tonic ... to take the flabbiness out of a man." Um, no thanks. I guess people have always liked to poison themselves with the hope it will give them a competitive edge.

Strychnine was the poison of choice of Dr. William Palmer, the notorious 19th century murderer Charles Dickens called "the greatest villain that ever stood in the Old Bailey."

Dr. Palmer was hanged for poisoning his friend John Cook with strychnine, and was suspected of feeding it to several other people including his brother and his mother-in-law, as well as four of his children. Palmer made large sums of money from the deaths of his family members after collecting on life insurance, and by defrauding his wealthy mother out of thousands of pounds, all of which he lost through gambling on horses.

Arthur Conan Doyle makes mention of Palmer in the Sherlock Holmes short story, The Adventure of the Speckled Band. And Dorothy L. Sayers mentions him in The Unpleasantness at the Bellona Club.

Another notorious poisoner—also a physician—Dr. Thomas Neill Cream,"the Lambeth Poisoner" famously fed strychnine to many of his patients. He was also suspected of poisoning his pregnant wife. He left victims in such far-flung cities as Toronto, Chicago and London. Later he poisoned a number of London prostitutes and tried to pin the the murders on W. H. Smith, founder of the UK bookstore chain. But he was convicted of the murders and hanged in 1892. With his last breath, he claimed to be Jack the Ripper, but not many people believed him. Poisoners generally stick to their murder weapon of choice.

Strychnine is not as readily available today, but it is still legal in some places as a rodent poison that can end up harming pets and other wildlife. It's illegal in the UK, but an unidentified man was
found dead on Saddleworth Moor on Dec 11, 2015. The cause of death was ruled to be strychnine poisoning.

Can you think of any other mystery writers who use strychnine? What about famous poisoners?

BOOMER WOMEN: Three Comedies about a Generation that Changed the World 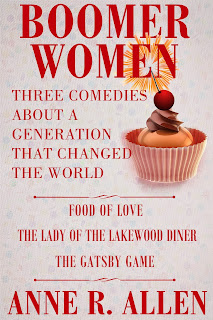 The Lady of the Lakewood Diner, Food of Love and The Gatsby Game, available in one boxed set.
At all the Amazons, Inktera, Nook, Kobo, Scribd
Posted by Anne R. Allen at 10:11 AM