A Serial Killer Poisoned the Lunches of 23 Co-Workers—Why? Most of the poisonings I've talked about in this blog are old news: Victorians poisoning their families with strychnine and 1920s housewives using household rat poison as an alternative to divorce court.

But this week a new and spectacular case of serial poisoning has made the international news.

A 56-year old man identified as “Klaus O.” of Schloss Holte-Stukenbrock in northwestern Germany was arrested in May for poisoning the lunch of a colleague. The engineering worker is also suspected of killing 21 more of his co-workers at a metal fittings company over a period of 18 years. Two other possible victims are alive but on life support.

Klaus was caught on camera adding a mysterious white powder to his co-worker’s lunch.

The intended victim had sensed something “funny” in his lunch and told his boss, who wisely called authorities. They studied the company’s security footage and caught the culprit red-handed, sprinkling a whitish powder into the man’s sandwich.


At first the police thought the food tampering was just a prank, but when they tested the food, they found it had been laced with lead acetate.

Lead acetate—once known as "sugar of lead"—is colorless and not unpleasant in taste. (It's slightly sweet.) But it's highly toxic. It would have caused organ failure and likely the death of the victim, had he finished his sandwich.

When the police investigated Klaus O’s home, they found a home poison-making lab equipped with mercury, lead and cadmium.


They also discovered there had been 21 mysteriously premature deaths at the company since 2000 and are now investigating them as possible homicides.

A number of the victims died young of cancer or heart attacks, which could have been the result of heavy metal poisoning. Two other possible victims are still alive, but one is in a coma and another on dialysis, according to Deutsche Welle

They report that the authorities are considering exhuming all 21 bodies.

But there is no information on the possible motive of this model employee of 38 years, whom the personnel manager called “conspicuously inconspicuous.” A colleague said that Klaus “always stayed by himself, did not speak and had no friends.”

It’s always the quiet ones, isn’t it?

Klaus has refused to comment since his arrest. But this story could provide a fascinating challenge for mystery novelists, couldn’t it? I can imagine a mashup of The Secret Life of Walter Mitty and Arsenic and Old Lace.

The quiet Klaus Ordinary takes the everyday bullying and jostling for power that happens in the workplace, and then one day decides to deal with the guy who’s been stealing his lunch by adding a little “something extra” to the sandwich.

When his victim drops dead of a heart attack and nobody suspects foul play, Mr. O. is emboldened. He decides to deal with the nasty woman in supplies who has refused to upgrade his squeaky uncomfortable chair. And that whiny one who is always claiming he gave her a cold, when he really only had an allergy attack. Then there’s the guy who took all the credit for the project they did as a team...and it's so easy.

He keeps working at the same job. 38 years. Because hey, there are no nasty bullies or whiners at the company anymore. He’s eliminated them all.

A lot of us have probably fantasized about solving office problems that way.

What about you? Does anybody have a scenario to suggest that would cause a quiet man like Klaus O. to become a serial poisoner?

SALE! 99c on All the Amazons until July 15th 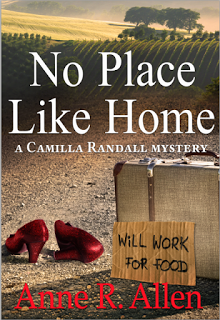 "A warp-speed, lighthearted comedy-mystery"...Abigail Padgett
"A fun, charming novel about the rich and less so" ...Karen Doering
"A cross of dry British humor and American wackiness, and it all adds up to a fun read." ...Deborah Bayles.
"It's comedy about a dark topic – homelessness – and it succeeds without ever descending into tasteless insensitivity, or tipping over into sentimentality."...Lucinda Elliot
Available at all the Amazons and NOOK,  Page Foundry, Kobo and iTunes It's also available in paperback from Amazon US, Amazon UK, and Barnes and Noble, in regular and LARGE PRINT. LARGE PRINT is also available at Barnes and Noble.
And NO PLACE LIKE HOME IS ALSO  AN AUDIOBOOK!!
Narrated by award-winner C. S. Perryess and Anne R. Allen (as Camilla)
Nearly 8 hours of hilarious entertainment!Only $1.99 if you buy the Kindle ebook
Available at Audible  and iTunes
Posted by Anne R. Allen at 10:40 AM