How to Tell a Story: Follow the Rule of Three


Recently I’ve attended some local storytelling events—mostly ones that mimic the NPR “Moth” Radio Hour stories. People gather around to tell true stories about events they’ve experienced. Alcohol or caffeine may be involved.

I say they “mimic” the Moth Radio Hour to be polite. It’s amazing how many people have no clue what storytelling is. They don’t know there's a world of difference between telling an entertaining story and blathering on about that time back in 1972 when you and your buddies dropped acid on that fishing trip and there was a bear…except it was a raccoon...and Fred thought it was a hat...and Kevin started singing the Davy Crockett song...and you got in a fight over whether Davy "kilt him a bear" or "built him a bar" when he was only three...

And eventually the bored crowd semi-politely claps you off the stage.

After a particularly excruciating night of “Old Men Falling off a Train of Thought” at a local coffee house, I sat down to write this handy guide.

I never found a way to present this diplomatically and the gatherings stopped soon after. But if you have any friends who love to talk, but need some help in shaping that talk into an actual story people want to hear, maybe you can point them in this direction.

To Tell a Story, Follow the Rule of Three

The backbone of any story, whether it's an anecdote, play, or novel is the three-act structure.

There's an old saw in the theater that describes it this way, "Act I—Get your character up a tree; Act II—throw rocks at him; Act III—get him down again."

And it still works.

Act I:  Get Your Character up a Tree

This is the set-up: a.k.a. the inciting incident or "call to adventure."

Tell us who your protagonist is and what s/he wants. (And yes, you need a protagonist. One.) A story needs less exposition than you think. We don't need anybody's life story—just tell us the stuff about the characters that's relevant to getting them up and down that tree.

When you're telling a story live, it helps to have the first line prepared, so you don't waste time throat-clearing. Consider some classic first lines:

So you've got their attention. Now there's something your character wants that gets him up that tree. Figure out what it is, and that's your inciting incident.


Act II: Throw Rocks at Him

This is where you build tension.

As  your hero tries to get what he wants, introduce one obstacle after another.


Yes, I know you're entranced by that rabbit and you're dying to follow him down that intriguing hole. But don't do it unless the rabbit will bring you back to the hero in his tree. Stick a pin in those ideas for a later story.

Your hero will thank you for it. And so will your audience.

Act III: Get Him Down

Build to a climax. Then end it.

This is where you reach a scene (or sequence of scenes) where the tension of the story gets to its most intense point.

So maybe the hero is hanging from one wimpy branch, about to fall from the tree into the mouth of the fire-breathing dragon.

Suddenly, princess Dragonia emerges from the sky on her own pet dragon and whisks him from the tree to her own kingdom where they have a fabulous destination wedding.

So the problem is resolved, hopefully leaving the characters with new insight and understanding.

Once you've done this, your story is over, so take a bow and don't step on your own applause.

You might want to prepare a final line that emphasizes the insight, especially if your story is based on a particular theme. Here are some famous last lines:

See it's that easy. I know. Laugh here. Good storytelling is one of the toughest things there is. But if you keep the rule of three in mind, it helps enormously.

What about you? Do you follow rabbits instead of focusing on the tree when you're telling a story? Can you manage to take the story back to the hero's story in the end? 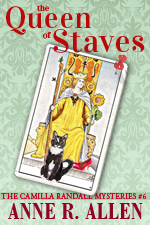 "I really enjoyed the book from start to finish. Wonderful characters and a ripping story which never lets up right up to that fabulous showdown !"...award-winning Irish humorist Tara Sparling

And in paperback at Barnes and Noble and Amazon

Email ThisBlogThis!Share to TwitterShare to FacebookShare to Pinterest
Labels: how to tell a story, storytelling, The Queen of Staves