Seafood poisoning provides a wealth of plots for mystery writers. Naturally poisonous seafood can often lead to death, so a carefully planned murder can easily be blamed on accident.

Plus there are lots of varied and unusual kinds of poisonings—and seafood contamination is growing with climate change.

Good for mystery writers. Not so good for seafood lovers.

Actually, red tides aren't always red and aren't tidal. They are dangerous blooms of toxic algae that poison shellfish and the predators—including humans—who dine on the shellfish, especially mollusks.

Toxic algae blooms of various sorts have increased in recent years with climate change, so deaths of marine mammals and humans from eating seafood are increasing, making it difficult to prove intentional murder when a person dies after ingesting "bad seafood."


In Shirley S. Allen's mystery, Academic Body, a professor is studying one of the species of algae that causes the red tide, the dinoflagellate gonyaulax, which turns out to make a handy murder weapon.

Dinoflagellates are one-celled organisms that have both plant and animal characteristics, so they're sometimes placed in a phylum of their own rather than with the algae. When the water warms, like with the recent El Nino, it brings a rich nutrient supply from deep ocean and the dinoflagellates get so dense, they overpopulate. That's when they can turn the seawater red by day and phosphorescent at night. (But some dinoflagellates can poison water without turning it red.)

An especially intriguing toxin found in the algae/dinoflagellate blooms is domoic acid, first isolated in red algae in 1959. It is a neurotoxin that inhibits neurochemical processes, causing short-term memory loss, brain damage, and, in severe cases, death.

Unfortunately, domoic acid is a heat resistant and very stable toxin, so it isn't destroyed by normal cooking methods or freezing. There is also no known antidote, so if you want your character to survive, then them to a hospital asap.

Animals can behave strangely when they have eaten seafood contaminated with domoic acid. About a decade ago a bunch of brown pelicans flew directly into car windshields on the Pacific Coast Highway. They were found to be poisoned with domoic acid. Just this week, a friend told me a seal was found disoriented on a local beach, moving as if it were swimming in the water. Domoic acid from a nearby red tide bloom was the suspected culprit.

There was also a famous incident in Santa Cruz, California in August of 1961, believed to be caused by domoic acid. The town was invaded by what people described as "chaotic seabirds" who attacked people for no apparent reason. Although Alfred Hitchcock's film The Birds was losely based on a 1952  Daphne Du Maurier Story set in Cornwall, the California incident gave a bit of horrific credibility to Hitchcock’s film which came out in 1962

More recently, domoic acid was used to poison a witness in the TV series Elementary, episode The Red Team.


Sushi is always good for a nice poisoning. There's always a little fear that things might not be right with the refrigeration or if you really want to get nasty, there's…puffer fish, which the Japanese call fugu.

The super-toxic poison in puffer fish is tetrodotoxin. It's 1200 times more lethal than cyanide. There's enough of the stuff in one pufferfish to kill 30 humans.

Hey, that's a lot of bad boyfriends your villainess could wreak her revenge upon.

It's pretty amazing that people eat this stuff on purpose. Apparently about five people a year make it their last meal, even though it takes two years to be certified to prepare it.

It's not a very nice death. Like domoic acid, it's a neurotoxin, so it starts with the tingling, then the paralysis, and then you get slowly zombified, but you're aware the whole time. Not a great way to go.

The poison is manufactured in the fish's body by bacteria they ingest from their environment, like the toxins in the poison dart frog. So scientists have been working on a way to raise the fish in a bacteria-free environment so they don't produce any of the poison.

But apparently the safe fish isn't anywhere near as appealing to the fugu-loving public, in spite of the fact it apparently tastes the same. Somehow that element of danger is what gives it the flavor they crave.

What about you? Any good seafood poisoning stories? Have you ever eaten a Pufferfish?

Retired Broadway director Paul Godwin longs for the life of a college professor, but can he woo his famous actress wife away from the New York stage to become part of his academic life in small-town Maine?

Not easily, especially after the dean accuses him of having a fling with a student. When said dean is found dead, Paul becomes a prime suspect. Paul's efforts to discover the real culprit provoke dangerous reprisals, but he must succeed to save his new career, his marriage...and perhaps his life. 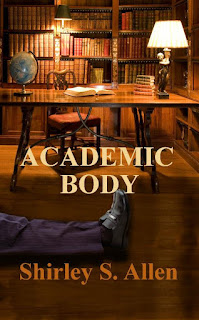 Academic Body is only 99c or the equivalent at all the Amazons, Kobo, iTunes, and Nook
Posted by Anne R. Allen at 11:22 AM