Abrus Precatorius sounds like the name of a faculty member at Hogwarts, doesn't it? But it's a poisonous plant, also known as the rosary pea. It contains abrin, which is the most toxic substance found in nature. It is nearly 100 times more toxic than ricin. 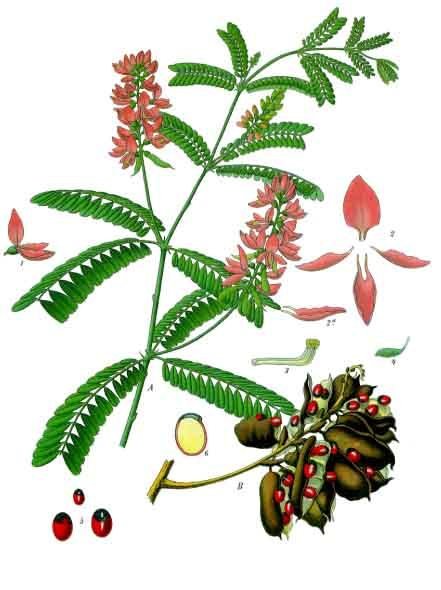 But actually killing somebody with it is tougher than you might think, because extracting the poison from the very hard-shelled seed isn't easy.

The plant is also commonly known as jequirity, or crab's eye creeper. It's a hardy, perennial legume that thrives in tropical and subtropical climates. The climbing, invasive plant, native to India, is best known for its brightly colored seeds—usually red and black—which are used in jewelry making.  Crafters can order 100 of the seeds online for about $6.

One seed, sufficiently crushed, contains enough abrin to be fatal to an adult human.


The seeds are also used in percussion instruments in many parts of the world, especially for maracas.

The plant is popular in the Caribbean, where it's supposed to ward off evil spirits, and in China, where the seeds are a symbol of love. In southern India, where it's known as kundu mani, the leaves are used in traditional Siddha medicine to bring down fevers. An oil made from it is thought to be an aphrodisiac.

The rosary pea is classified as an invasive weed in the American southeast. 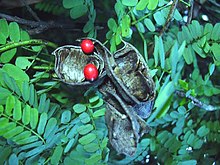 Symptoms of poisoning from ingesting the plant include nausea, vomiting, convulsions, liver failure, and death, usually after several days.

But, according to the National Institute of Health website, people who try to use it to kill usually fail because the outer shell is so hard they are not able to crush the seeds sufficiently. Most people who ingest the seeds end up with mild symptoms and recover.

The seeds are most dangerous when they have been pierced to make beads, or when they are fresh in the fall and their shells have not hardened. So most rosary pea poisonings are accidental. Jewelry makers have died of it, as have children attracted by the bright colors of the seeds.

They have been used to kill, but people need to know what they're doing.

In India abrus seeds have been used for centuries by the Chamar—one of the "untouchable" castes—in a clever, undetectable scheme for illegally killing cattle for their hides. The tradition is to make a paste of the seeds and then coat sharp spikes called suis with it and dry them in the sun. When a cow is stabbed with the poisoned spike, it dies about a day and a half later. The cause of death is usually undetectable.


And apparently this is practice has been used to kill humans in an even cleverer scheme. Two suis coated with the toxic paste could be mounted on a wooden handle about as far apart as a snake's fangs. The victim would be hit (presumably while in a crowd) with the mounted suis, and would die a day or so later.  Cause of death, snake bite.

But contemporary would-be killers don't seem to plan so well. In Australia in 2001, a man apparently tried to kill his family for their life insurance money by feeding them abrus seeds, but when that didn't work, he had to resort to old fashioned stabbing.

During the investigation, the police found an order for abrus seeds on his computer and contacted the seller, who at first was afraid he might be accused of being an accomplice. He tells the whole story in an interesting online forum thread at an Australian site called Corroboree .

But deaths from abrus pecatorius are rare, considering its toxicity. The seeds won't do much more than give somebody a stomach ache if swallowed whole, as they pass through the body pretty much intact. And strangely enough many people survive ingesting ground-up seeds. Some have died, but a remarkable number survive. Scientists think this is because the toxin abrin is absorbed very slowly. That means people survive if given timely medical care. There's no antidote to abrin, but the normal treatment for poison ingestion—gastric lavage, charcoal, IV fluid and electrolyte replacement—can have positive results.

Inhaled or injected abrin is much more dangerous, like the lethal paste injected with the sui by the Indian Chamar. So if you're planning an exotic fictional murder, a connection to India might be a plus.

Although if abrin were weaponized as ricin has been, it would be a danger to all of us. So far that hasn't happened but in 2014, an enterprising teen sold what he claimed was pure abrin online (along with methamphetamine and a pipe bomb.) Unfortunately for him, he sold them to an undercover FBI officer and the Feds never disclosed whether it was the real deal.

What about you, readers? Have you read a thriller with a plot involving Abrin or Abrus Precatorius? How about that Indian fake snakebite thing? That could make a very interesting plot, couldn't it? Have these rosary peas got any plot wheels turning for you?

NOTE: I've been having way too much fun with this series, which means I haven't given myself time to finish my WIP. My publisher is getting nervous. So after next week's post, this blog will go on hiatus for a while. I'll go to once a month posts here until Camilla #6 is ready to go off to my editor. You can still find me weekly at my big blog AnneRAllen.com (with the wonderful Ruth Harris) and on Facebook, GooglePlus, Twitter, and other social media.

THE CAMILLA RANDALL MYSTERIES: Ghostwriters in the Sky, Sherwood, Ltd. and The Best Revenge The first three books in the series in a box set for only $3.99. That's only $1.33 per ebook!

And you can read a review of the boxed set at Breath of Life Books, by Kim Justice.
Posted by Anne R. Allen at 10:46 AM