Poisoning People for Fun and Profit: Can Bleach and Ammonia Kill?


I don't know if it was my own mother or somebody else's who first warned me of the dangers of mixing bleach and ammonia. But like most kids I knew, I was told when I was very young that the mixture was lethal and would produce "mustard gas."

In fact, one of my first attempts at writing a mystery, when I was in about third grade, involved a mysterious corpse found in the girl's bathroom of an elementary school, and the deceased had been done in by mustard gas made from bleach and ammonia.

I thought I was terribly clever, since those were cleaning supplies that could be found in any janitor's closet in those days, so anybody could be a suspect. 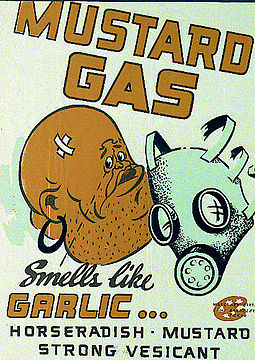 I never could decide on a murderer or a motive, so I never finished the book, which I started writing with a schoolmate who lost interest in it before I did.

But it's just as well, because it seems that I (as well as our moms) got it wrong.

Bleach and ammonia do form a toxic gas, chloramine, but it's not "mustard gas" otherwise known as "Sulfur Mustard" the horrific chemical weapon used by the Germans in World War I.

Mustard gas actually smells like garlic and it's a "vesicant," which means it causes corrosive burns on the skin.

Chloramine gas, which is what happens when you combine bleach and ammonia, doesn't burn the skin, but it can cause respiratory damage and throat burns.

However, it's not likely to kill you unless you're cleaning in a very small unventilated space.

But…if there's more ammonia than bleach, the explosive hydrazine might form. Hydrazine was used as rocket fuel in WWII. Explosions do kill people, so in that way the combo can be lethal.

But it's certainly not a surefire way to kill somebody. So I wouldn't recommend it to any mystery novel villains.

In researching this article, I ran into an awful forum where teens were bantering about how they planned to kill themselves. One young man was convinced that mixing bleach and ammonia and inhaling the fumes would take him off on a fairly painless trip to heaven. (I'm not going to link to it because it don't want to give those idiots the clicks.)

Luckily ammonia is so stinky it would probably put him off before he got very far. But all he'd do was burn his throat and maybe permanently damage his lungs. Very painful, but unlikely to be deadly.

Mixing bleach and Drano is apparently more likely to kill, although again, the conditions have to be exactly right.But it's definitely not a good idea to pour bleach in the toilet after you've poured in Drano to unclog it.


In general, it's good to remember that mixing your household cleaners isn't wise. However, if you're a mystery author, forget the homemade mustard gas as a murder weapon. A nice dose of Warfarin or a Hemlock salad would work better.

What about you? Were you told that bleach and ammonia make mustard gas? Where do you suppose the myth originated? Anybody know?

Email ThisBlogThis!Share to TwitterShare to FacebookShare to Pinterest
Labels: chlorine and bleach, Ghostwriters in the Sky, murder by poison, mustard gas