On March 4th of this year, a former Russian spy named Sergei Skripal and his daughter Yulia collapsed near a park bench in the quiet English cathedral town of Salisbury. Luckily Yulia is now expected to recover, but her father is still in critical condition.

and [she was] frothing at the mouth. Then the man went stiff. His arms stopped moving, but he’s still looking dead straight.” These are the signs of poisoning with a nerve agent, aka a “Weapon of Mass Destruction.”

The best-known nerve agent is Sarin. As a gas, it has been used for mass murder, like Saddam Hussein’s attack on the Kurds in 1988 and the attack by a religious cult on the Tokyo subway system in 1995. Its use is also strongly suspected in the Syrian civil war.

Exposure to nerve agents is lethal even at very low concentrations, and death can occur within one to ten minutes after direct inhalation of a lethal dose. They can be inhaled, ingested, or swiped on skin or clothes. A police officer who handled the Skripals was also hospitalized after entering the Skripals' home. Police think the poison had been smeared on their front door, where they found the major concentration of the nerve agent.

Many British lives were put at risk by the brazen attack.

What a nerve agent does to the body is basically disable the “off” switch on the nervous system. This means regular body functions go on overload. The victim starts sweating, vomiting, and frothing at the mouth. Followed by convulsions. Eventually, the muscles give out and they fall. This can lead to paralysis and suffocation.

There is an antidote, atropine. Yes, that’s the atropine thatI mentioned earlier in this series. It comes from plants of the Solanaceae family like nightshade, datura, Jimson weed, mandrake, and belladonna.

The first nerve agents were discovered by Nazi scientists who were working on developing pesticides. In 1936, one of the German chemists synthesized a molecule that was highly efficient at killing insects. The only problem is that it was great at killing people, too.

It also means nerve agent poisoning can be mistaken for pesticide poisoning.

Hitler’s military got hold of the dangerous pesticide and named it “tabun” after the German word for taboo. Tabun is now known as GA. The G-series nerve agents are so named for their discovery by Germans: sarin (GB), soman (GD), and cyclosarin (GF). Although the Nazis stockpiled nerve agents during World War II, they never deployed them.

During the Cold War, scientists worked on developing even deadlier nerve agents. And they have been used for individual murders as well as mass killings.

VX, “venomous agent X,” was discovered in Britain in the 1950s.  For years, a similar chemical called VG was sold as the insecticide Amiton, before it was pulled off the market for being too toxic.
VX was the nerve agent used to assassinate Kim Jong Un’s half-brother in 2017. In spite of the fact that Kim Jong-nam had atropine with him at the time of the attack, he died of the toxin.  The poison made him immediately incoherent and he wasn’t able to tell authorities what was wrong before he died 15 minutes later. (The atropine tablets probably wouldn’t have helped anyway. Only an injection could have fought off such a lethal attack. )

There were long rumors that the Soviets had developed an even more powerful nerve agent, “Novichok” or “newcomer” later during the cold war. It was supposed to be undetectable by the lab tests of the time.

But there was no proof of the existence of Novichok in the west until the attempted murders in March. But now British scientists say that the weapon that attacked the Skirpals and the British policeman was indeed Novichok.

Of course the Russians deny they have any Novichok and insist know nothing of the assassination of their turncoat spy.

They are shocked, shocked at such an accusation.

But the US, UK and European Union have retaliated against the alleged Russian attack by expelling hundreds of Russian diplomats, and the Russians have responded in kind. The poisonings have caused what is now a major international diplomacy crisis. 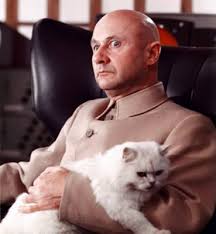 Although the Russian denial is more improbable than any Ian Fleming plot, if the Novichok really didn’t come from the Kremlin, the Russian story would provide a rip-roaring plot for a spy thriller.

What if the Russians really had destroyed all their WMDs after the fall of the Soviet Union? What if one rogue spy got hold of all the Novichok, and was intending to murder everybody who knew about Novichok and frame the oh-so-innocent Russians in order to start a world war?

All the rogue spy would need is a fluffy white cat and then he could move on to World Domination!

Where is James Bond when we need him?


The Audiobook, narrated by CS Perryess and Anne R. Allen is available from
Audible and iTunes