Gelsemium is a plant that Arthur Conan Doyle believed might provide a break-through painkiller and anti-anxiety medicine.

Instead, it nearly killed him.

Gelsemium is a flowering plant native to North America and Asia. It’s a beautiful, hardy landscaping plant that can be found all over the warmer parts of the US. Yellow Gelsemium (Carolina Jessamine) is the state flower of South Carolina.

Gelsemium is a Latinized form of the Italian word for jasmine, gelsomino, but it’s not related to the classic jasmine plant Jasminum officinale, which is NOT poisonous. In fact “official” jasmine is related to the olive tree, and as most people who have been a Chinese restaurant know, makes a lovely tea.

But don’t make tea out of gelsemium!

Two species of gelsemium are native to North America, and one to China and Southeast Asia.

1) Gelsemium Sempervirens, Carolina jessamine, is found all over the US and Central America, and often used in landscaping. Yellow jessamine is sometimes called “evening trumpet flower.” As I walked around my neighborhood recently, I saw it everywhere. It’s hardy enough to survive the salt air here at the beach. It’s intriguing enough I may reconsider the murder weapon in my next Camilla mystery.

3) Gelsemium elegans, native to China and Southeast Asia, which is nicknamed "heartbreak grass,” grows in Asian foothills and mountains. It’s the most deadly of the species.

The active components of gelsemium are alkaloids. Mostly a gel called emine, which is a poison related to strychnine.

Like most poisons, gelsemium has historically been used for medicinal purposes in small doses. It was once used topically to treat many ailments, including skin eruptions, facial tics, and measles, and it was ingested in a tincture to treat rheumatism, various tropical diseases, headaches, nerve pain, and psychological disturbances.

That's why the 20-year-old Arthur Conan Doyle decided to experiment with it. He hoped a tincture of gelsemium would alleviate the headaches and depression he suffered as a young medical student. Showing that his Sherlock Holmes stories may have been more than a bit autobiographical, he tested the newly discovered drug on himself—observing and taking notes as he increased the dosage. Eight years before he created Sherlock Holmes, he was a medical sleuth himself.

In 1879, he reported his less than encouraging results in the British Medical Journal. He discovered the drug caused paralysis along with alleviating the pain and caused a constellation of life-threatening side effects including debilitating intestinal distress.

But young Conan Doyle’s experience didn’t dissuade others from using gelsemium. As late as 1906, a drug called Gelsemium D3 (made from Gelsemium sempervirens) was used in mainstream medicine. It was considered a safe treatment of facial tics and malaria. It is still used as a homeopathic remedy, but it is not considered safe in any discernible doses.

It is, however very effective as a poison. It’s fast acting, and symptoms appear within minutes.

Breathing and vision are affected first. Then the victim suffers dizziness, nausea, and convulsions, and eventually paralysis and cardiac arrest. It appears that the victim has simply had a heart attack.

That may be while gelsemium has become popular with contract killers and political assassins. There have been two high profile victims of gelsemium in the past decade.

Long Liyuan. In December 2011 Chinese billionaire Long Liyuan died after lunching with business rivals. The cat-stew he was eating had been poisoned with Gelsemium elegans. (I tend to think it serves him right for eating kitties.)

Alexander Perepilichny. Perepilichny died at age 43 after going out for a jog in London in November 2012. He had escaped Russia after blowing the whistle on a major tax fraud involving high ranking Russian officials. Although he had been warned of Kremlin death threats, his death was first ruled a heart attack by the British authorities.

In 2017, a U.S. intelligence report to Congress stated with "high confidence" that Perepilichny was assassinated with gelsemium on the orders of the Kremlin.

The Gatsby Game, is only 99c at all the Amazons this month

A paper version is available for $10.99 at Amazon and Barnes and Noble.

The ebook is available for $2.99 at Barnes and Noble for NOOK, Inktera and Kobo. It's also available at Scribd. 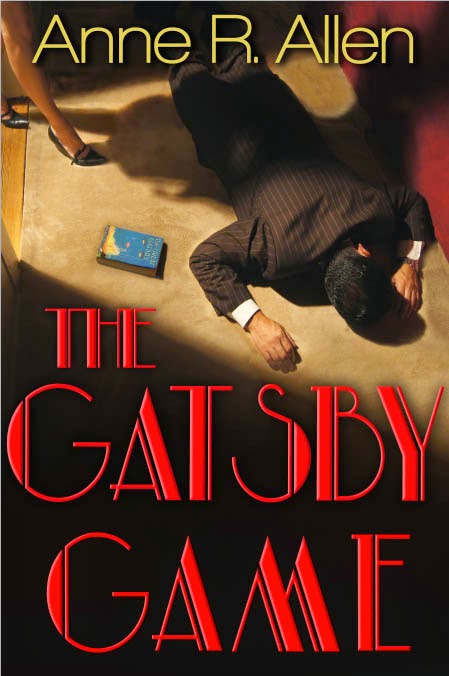 As evidence of murder emerges, Nicky Conway, the smart-mouth nanny, becomes the prime suspect. She's the only one who knows what happened. But she also knows nobody will ever believe her.

The story is based on the real mystery surrounding the death of David Whiting, actress Sarah Miles' business manager, during the filming of the 1973 Burt Reynolds movie The Man Who Loved Cat Dancing.
Posted by Anne R. Allen at 10:59 AM